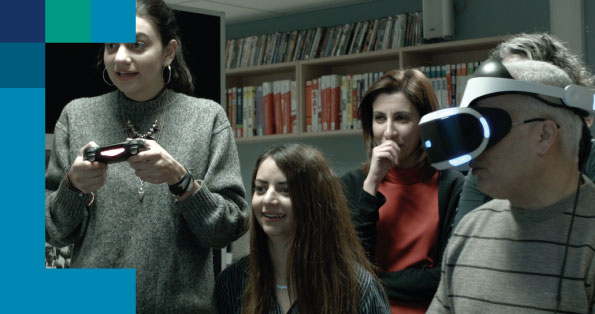 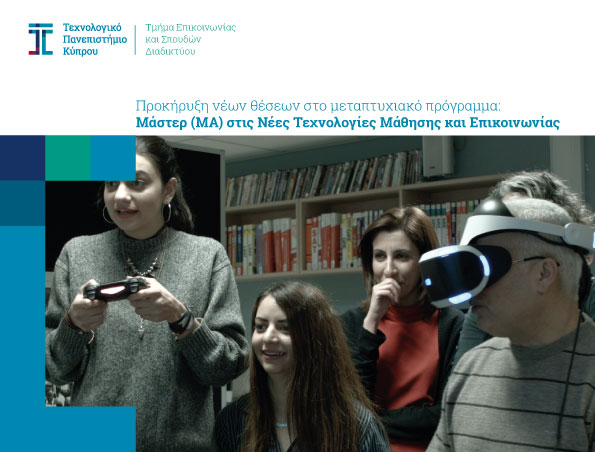 The Media, Cognition & Learning [MCL] research group announces that it will no longer accept any additional applications for its July 2017 summer club, as all spaces have been filed. We apologize for any inconvenience. Thank you for your interest in this summer club.

The Media, Cognition & Learning [MCL] research group invites applications for its summer club, which will take place between July 17-21, 2017, at the campus of the Cyprus University of Technology in the center of Limassol.  The summer club will be conducted in Greek and will include STEAM activities, focusing on science, technology and culture.  Applicants should be concluding their studies in grades 5-8 this summer and should be fluent Greek speakers.

The basic goal of the Summer Club is to provide students the opportunity to participate in a variety of innovative educational activities related to new technologies for learning.  For instance, students will have the opportunity to take part in a repertoire of innovative educational activities, such as socio-scientific investigations employing augmented reality applications and digital games.

The deadline for submitting your application is Friday, June 30th.

The Cyprus University of Technology has announced new positions for graduate studies. The deadline for applying is will announce soon. Visit this page for mοre information.

The Cyprus University of Technology has announced new positions for graduate studies. The deadline for applying is will announce soon. Visit this page for more information (in Greek).

The EARLI and JURE 2015 conference in Limassol, Cyprus.

A report by the organisers.

The 16th Biennial conference of the European Association for Research on Learning and Instruction and the 19th JURE conference took place at the coastal city of Limassol between August 23-August 29, 2015, and were hosted by the Cyprus University of Technology. The conferences were co-organized by the Department of Communication and Internet Studies at the Cyprus University of Technology and by the EARLI association. The organization of the EARLI 2015 conference coincided with the celebration of the 30th anniversary of the EARLI, which first took place in Leuven, Belgium in June 1985 and the 20th anniversary celebration of the JURE conference.

The theme of this year’s conference was “Towards a Reflective Society: Synergies between Learning, Teaching and Research”. Reflective citizenship lies at the heart of contemporary societies. The 21st century calls for a re-definition of the forms of knowledge, skills and competences that are necessary for the advancement of our societies. While the focus on basic skills and the need for disciplinary knowledge cannot be ignored, there is a need to work towards increasing the reflective capacity of our societies. The EARLI 2015 theme emphasized research-based learning and instruction and highlighted the crucial role of the systematic investigation of learning and teaching as a mechanism for promoting innovative and creative thinking and sustaining long-term societal growth.

As with every EARLI conference, the preparations begun right after the end of the EARLI 2013 conference in Munich and spanned over two years. Many members of the EARLI community were involved in this process, as, in addition to the conference organizing committee, the organization was also steered by the International Programme Planning Committee and Scientific Panel, the EARLI Executive Committee, and included input from the SIG coordinators, especially in involving reviewers and in deciding the invited keynote speakers. The review process involved over 370 reviewers and the final scientific programme included more than 3000 unique contributors (authors or co-authors) from 48 countries. The programme was impressive in its cover of a wide variety of research, cultural contexts and methodological traditions.

We next present a highlight of the scientific and social events of the conference.

The EARLI organization attaches great importance on the development of young researchers. Between the 23rd and 24th of August 2015, the JURE (Junior Researchers of EARLI) pre-conference took place. The JURE 2015 conference, which was co-chaired by Dr. Maria Solomou, special scientist at the Department of Communication and Internet Studies, and Mr. Yiannis Georgiou, a Ph.D. candidate at the Department of Communication and Internet Studies, attracted more than 300 people from all over the world. A total of 157 submissions were presented at the JURE conference (paper presentations, poster presentations and round tables), while 15 workshops were given by established researchers from the field of learning and instruction.

The conference opening ceremony on Tuesday, August 25, attracted many EARLI 2015 delegates who enjoyed the traditional dance performance by the Limassol Folklore Association and were treated to Cypriot traditional sweets. Eleni A. Kyza (Conference President) and Iolie Nicolaidou (Conference Manager) welcomed the EARLI attendees and provided an overview of the schedule and events for the EARLI conference. Professor Toula Onoufriou, Vice Rector of Academic Affairs at the Cyprus University of Technology, welcomed everyone on behalf of the University.

The conference was well attended by 1800 researchers and had the invaluable contribution of more than 125 volunteers from all over Cyprus. Each one of the five days of the conference consisted of 21-30 parallel sessions with an average number of four presentations in each session. In total, over 1500 contributions were presented in different formats (symposia, paper presentations, poster presentations, ICT demonstrations, workshops, round tables and keynote speeches). The presentations were grouped in 47 scheduling categories based on the various research areas of EARLI.

Presidential Address and the recipients of the EARLI 2015 Awards

On the evening of the first day of the conference the President of EARLI (2013-2015) Professor Costas P. Constantinou (University of Cyprus) presented an inspiring speech at the lovely open-air municipal theatre.

The event continued with the presentation of the EARLI 2015 awards. The Erik De Corte Award, which recognizes young, promising scholars in the field of Learning and Instruction was presented to Dr. Bjorn de Koning, from VU University, The Netherlands. The Outstanding Publication Award was presented to Dr. Cornelis J. de Brabander (Leiden University, Netherlands) and Professor Dr. Rob L. Martens (Welten Institute, Open University of the Netherlands) for their paper “Towards a unified theory of task-specific motivation”, which was published in Educational Research Review. The Oeuvre Award, which recognizes lifetime, outstanding contribution to scholarship and research was presented to Professor Dr. Monique Boekarts, from the University of Leiden, The Netherlands. Congratulations to all!

The end of Presidential Address and Awards included two special citations for two members of the EARLI community who have contributed a considerable amount of their personal and professional time in the last decades to the service of the EARLI association. The special citations went to Filip Dochy, who is stepping down as EARLI Managing Director after 10 years, and Costas P. Constantinou, who is stepping down from EARLI president and EC member. Warm thanks went to both of them for their continuous efforts to strengthen the EARLI association.

The event concluded with a spectacular reception at the gardens of the Patticheion Municipal Museum Gardens, accompanied by the sounds of jazz music.

The EARLI 2015 conference programme included many social events, which gave the participants the opportunity to interact in a more relaxed setting. These events included the “Lunch with the Professors”, the “Doctoral Consortium Lunch”, the SIG dinners on Wednesday evening and the spectacular Gala dinner by the St. Raphael resort marina. The gala dinner attracted 600 delegates who enjoyed cypriot and international cuisine and danced to local and international music.

In 2015 the EARLI organization celebrates 30 years since its founding. The Cyprus University of Technology was proud to host the conference at such a historic, for the EARLI association, time. Everyone in the center of Limassol have felt the pulse of the conference, as delegates circulated daily from the area of the medieval castle to the Rialto theatre. The organizing committee of the conference would like to thank the Rector and the vice-Rectors of the university, the university officials and all the administrative staff and volunteers who participated and supported the conference. Special thanks are due to all organizing committee members who have worked with tremendous dedication for the success of such an international scientific conference.

16th Biennial EARLI Conference for Research on Learning and Instruction

The European Association for Research in Learning and Instruction (EARLI) conference is one of the largest and most important educational research conferences at European level and worldwide. It is an excellent opportunity to be updated on research about learning and teaching approaches related to educational and other learning environments.

The 16th Biennial Conference of the will take place in Limassol, Cyprus at the Cyprus University of Technology (CUT) from the 25th to the 29th of August 2015.

The theme of the EARLI 2015 conference is “Towards a Reflective Society: Synergies between Learning, Teaching and Research”. The EARLI 2015 theme addresses the emphases of the conference on research-based learning and instruction, while highlighting the crucial role of the systematic investigation of learning and teaching as a mechanism for promoting innovative and creative thinking and sustaining long-term societal growth.

Reflective citizenship lies at the heart of contemporary societies. The 21st century calls for a redefinition of the forms of knowledge, skills and competences that are necessary for the advancement of our societies. While the focus on basic skills and the need for disciplinary knowledge cannot be ignored, there is a need to work individually and collectively towards increasing the reflective capacity of our societies. This means that different stakeholders, such as learners of different ages and stages, teachers at all levels, and researchers need to focus on being reflective in their practices and need to synchronize efforts, so that we can all reach the ambitious goal for education as an integral and productive force of an innovative modern society