Press enter to begin your search

The review of the literature, and our own research-based conclusions from previous professional development projects (PROFILES, CoReflect) all point to the need to engage teachers in extended professional development experiences (Loucks-Horsley, Stiles, Mundry, Love, & Hewson, 2010). Change is slow, especially when dealing with innovative approaches, such as SSIBL, and the desire to bring about reform in actual practice. The PARRISE Cyprus approach sought to not only inform teachers of SSIBL and help them gain a deeper understanding of the SSIBL framework, but wished to go a step further to supporting teachers in designing problem-based SSIBL modules that address all SSIBL pillars, and test them at their schools with their students.

Therefore, we recruited in-service teachers from elementary, lower secondary and upper secondary classrooms, from the disciplines of biology, chemistry and elementary science. Since the TPD took place during the teachers’ own time, and given the multiple demands on teachers’ schedules, we opted for a blended approach to professional development that combined face-to-face (f2f) and online professional development meetings. The approach is shown in Figure 1. 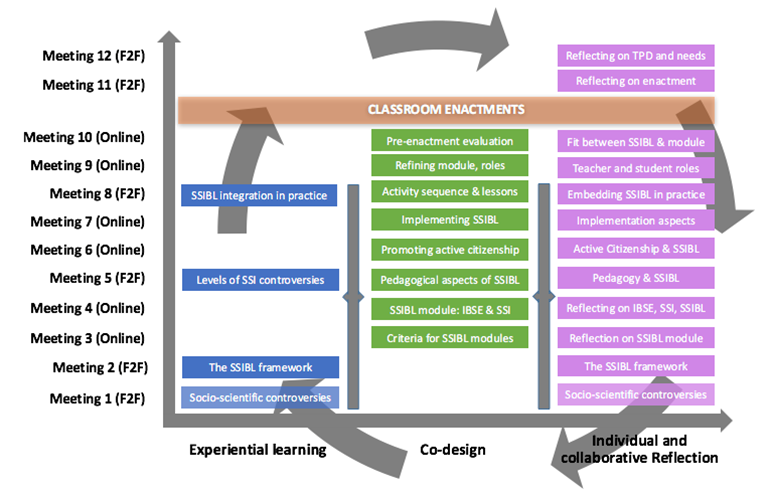 The TPD approach combined experiential learning, occurring during five face-to-face meetings, co-design meetings (most often taking place online during the evenings), and continuous reflection activities. Four main aspects of the TPD served as the main mechanisms for supporting TPD processes: experiential learning, co-design, the opportunity to enact and assess the effectiveness of the SSIBL implementations, and continuous opportunities for reflection. Reflection was a key aspect of the TPD and was fostered through teacher educator scaffolding, peer feedback, feedback between interdisciplinary groups, the co-design process and the opportunity to enact, evaluate and reflect on the SSIBL framework.

The experiential activities were based on a constructivist approach to learning, and engaged teachers in an inductive exploration of the need and meaning of the SSIBL pillars (inquiry-based science education, socio-scientific issues, citizenship education) and how they relate to the grand ideas of Responsible Research and Innovation (RRI). Meeting 1 focused on discussing the nature of science and its role, especially on controversial socio-scientific issues, in addressing societal needs. The teachers were introduced to the idea of Grand Challenges and the need to discuss the role that science education can play. In the main experiential activity, the teachers assumed the role of students and engaged with a problem-solving online learning environment on the use of antibiotics in livestock. Through this situation, teachers were implicitly exposed to issues of socio-scientific controversy and the notion of responsible research, innovation and active citizenship.

The next meeting, which was again a face-to-face meeting, introduced teachers to the SSIBL framework explicitly, but without defining the pillars of IBSE, socio-scientific controversies, citizenship education and how they all contribute to RRI. Rather, teachers were guided to research online, collaborate, discuss and reflect, to make sense of the terms on their own. In addition, Meeting 2 marked the formation of the disciplinary co-design groups, which were asked to identify curriculum areas which could then be modified or extended to integrate the aspects emphasized by the SSIBL framework. These groups collaborated until the end of the course to create and enact these PARRISE modules.

Co-design is an important tenet of situated learning during in-service teacher professional development (Kyza & Georgiou, 2014; Kyza & Nicolaidou, 2016). The co-design groups met online for 90-120 minutes each time on eight occasions between November 2015 and March 2016. These meetings supported the co-design, which was also strengthened by email communication and the two face-to-face meetings (Meeting 5 and Meeting 8). The classroom enactments (implementations) offered the unparalleled opportunity of testing out and refining SSIBL ideas, as the teachers’ reflection on the enactments indicated. Based again on our prior experience, we believe that enactments offer invaluable opportunities for situated learning (Kyza & Nicolaidou, 2016).

Figure 2 highlights the iterative and cyclical nature of the Cyprus TPD model, while also emphasizing that through these four aspects of the TPD teachers rotated through all four roles of teachers as: learners, designers,innovators, and reflective practitioners. 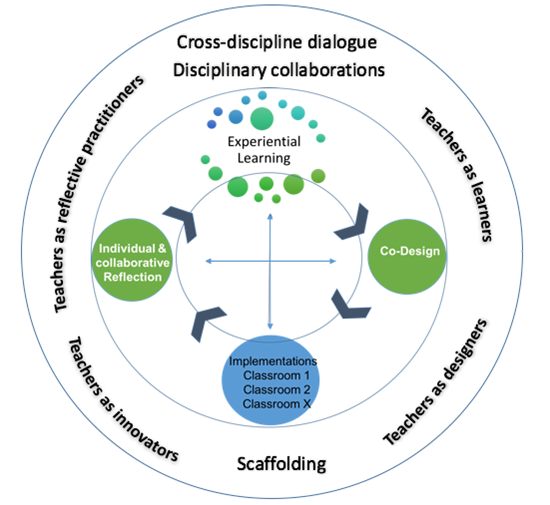 Each of the teacher teams co-designed a learning environment which was then implemented in different schools across Cyprus by the co-design team members. These eight SSIBL modules were enacted in 25 schools and 28 classrooms; they were taught by 26 teachers and 476 students who participated in these enactments. Preliminary analyses indicate positive results in terms of students’ perceptions of active citizenship and motivation to engage with SSIBL and PARRISE ideas. More analyses are underway and will be shared soon with the PARRISE community.